Price increases for US consumer goods slackened in August, falling to the lowest level since the start of the year and suggesting that the Federal Reserve’s prognosis for easing inflation may be correct.

Core prices, excluding energy and food costs, rose 0.1%, for the smallest gain since February. The forecast had been 0.3%. Compared to a year ago prices were up 4%. The drop from July's 4.3% was the first decline in six months. The estimate was 4.2%. 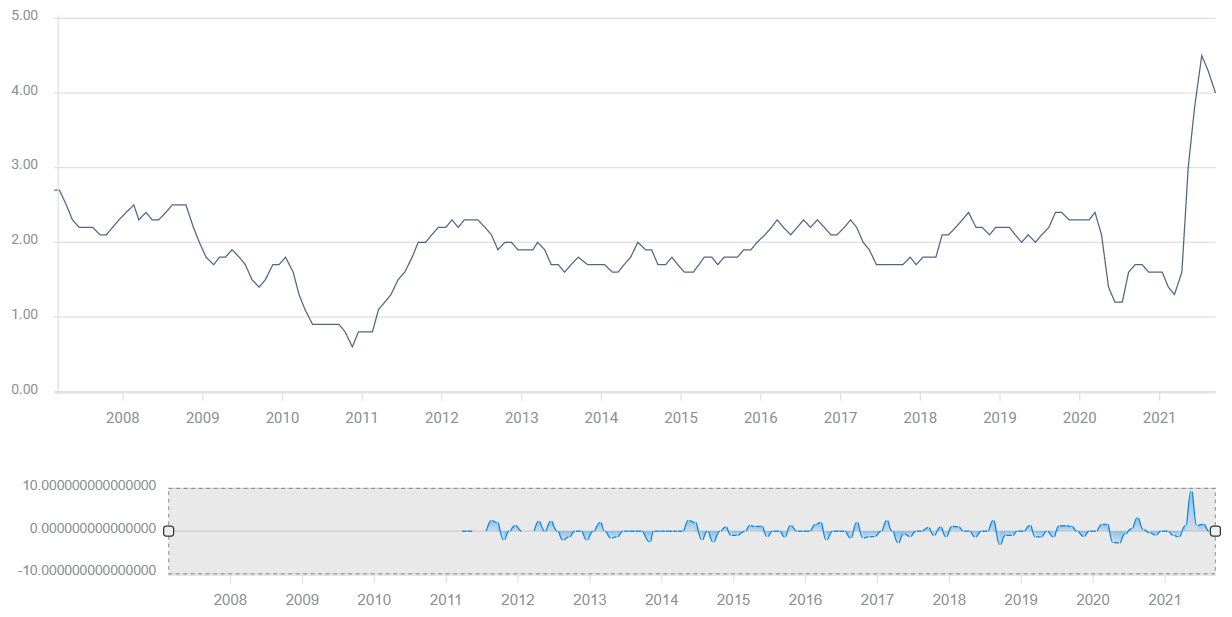 Mounting cost pressures are widespread in the economy. Material and component shortages, notably of the ubiquitous computer chips, combined with transportation bottlenecks have made keeping many factories in full operation difficult. Labor scarcity has prevented many businesses from maintaining a normal complement of services and facilities.

The shortages and labor problems are proving more intractable than merely those of reviving lockdown shuttered businesses.

Wage increases and bonuses offered by many employers in order to attract workers will not be rescinded and will result in further rewards as people have been slow to return to the labor force. Price hikes associated with the availability of goods and services are not expected to abate until well into next year.

The CPI report showed that the red-hot housing market is beginning to spill over into rental prices, which rose by the most since March 2020 in August.

Hurricane Ida closed many refineries and chemical plants in the Gulf states which will add to the supply constraints and price incentives for these basic industrial commodities.

A New York Federal Reserve survey this week found that consumers expect inflation to be 4% over the next three years. This is precisely the change in long-term expectations that the Fed has said is the bank’s chief concern.

The Fed has been preparing the markets for an end to the bond program since the first official mention of the possibility in the minutes of the April Federal Open Market committee released on May 19.

In late August, Fed Chair Jerome Powell raised the odds of a taper by asserting in his speech at the Jackson Hole symposium that the reductions would very likely begin before the end of the year.

Of the central bank’s two mandates, employment and stable prices, the latter interpreted by the Fed to mean 2% inflation, Mr. Powell admitted that the second had been achieved.

With core CPI at 4% in August and the core Personal Consumption Expenditure Price Index (PCE) at a record 3.6% in July, he could hardly do otherwise.

The Fed’s inflation averaging policy, adopted last September in front of what was certain to be a sharp escalation this year, deliberately removed inflation from the policy mix. Bank officials from Powell down, have been consistent in proclaiming that the inflationary surge is a product of last year’s lockdowns and the lingering effects of manufacturing and labor shortages.

Despite the official insouciance on inflation, the rapid price increases this year have heightened the pressure on the Fed to begin reducing its bond purchases and to let Treasury rates rise.

The Fed has good reason to delay the taper as long as possible.

When the FOMC dropped inflation from the policy mix it left the entire monetary and rate rationale dependent on the labor market.

Until the August Nonfarm Payrolls (NFP), it seemed a good bet that after two excellent jobs reports in June and July averaging 940,500 at their initial release (since revised to 1,007,500), the September 21-22 FOMC would see the announcement of the details of a bond program reduction.

August’s surprise NFP disappointment at 235,000, missing the forecast by more than 500,000, will have given the FOMC voters, whatever their view before the release, second thoughts.

The Treasury yield curve flattened with the CPI release. Yields on the 10-year and 30-year Treasuries fell 6 and 7 points respectively while the 2-year was unchanged.

Though the Fed has largely discounted inflation as a source of policy, markets have never wholly believed that assertion.

Rising prices are eroding the purchasing power of American families. Inflation-adjusted Average Hourly Earnings fell 0.9% on the year in August following a 1.2% drop in July.

The Fed has officially discounted inflation as a policy motivation. It is hard to believe that the governors and Chair Jerome Powell are really indifferent to the price increases that are eating into American wages and will soon impact consumption.

Inflation will withdraw from the highs of June and July but it is not going to return to the  Fed’s 2% target anytime soon. The longer price increases continue at an elevated level the greater the damage to consumer spending and the more embedded will become inflation expectations.

The inflation drag on consumption is illustrated by the recent drop in the Atlanta Fed’s GDPNow estimate. As of September 10, the forecast for the third quarter was 3.7%, down from its 6% forecast during most of August.

The combination of 3%-4% core inflation, 4%-5% headline CPI, a far lower growth rate and a rapidly weakening job market is the worst outcome for Fed policy.

Stagflation, that ugly economic condition from the 1970s, could be primed for a comeback.

The Fed has painted its monetary olicy into a corner. Inflation and inflation expectations are rapidly becoming the biggest threat to the consumer side of the recovery. Without robust consumption there is no return to the pre-pandemic labor economy.

Do the Fed governors see inflation as enough of a threat to the economic expansion and the labor market to override their long-standing focus on NFP performance and begin a taper next week? The odds seem very much against it.

US Consumer Price Index: Is stagflation next?

Read US Consumer Price Index: Is stagflation next? by FXStreet

US CPI inflation slowed way down in August

Read US CPI inflation slowed way down in August by Quartz on MSN.com

Despite Pundits’ Claims, Here’s Why The August Consumer Price Data Is Not ‘Tame’

Read Despite Pundits’ Claims, Here’s Why The August Consumer Price Data Is Not ‘Tame’ by Forbes

Inflation Is Cooling Off

Read Inflation Is Cooling Off by Slate on MSN.com

What really causes inflation? Here’s what prices since 1970 tell us

Read What really causes inflation? Here’s what prices since 1970 tell us by MoneyWeek

Read ‘BJP claimed double-engine govt, now has made a volte-face’: CPI(M) leader Manik Sarkar by The Indian Express on MSN.com

US inflation slowed way down in August

Read US inflation slowed way down in August by Quartz