Teenager Shalyah Fearing barely clung on to her spot on The Voice after twice getting last-minute saves from being sent home.

The 16-year-old singer came back to the Live Playoffs with such a stunning performance of Beyonce's Listen that she sparked one of the loudest ovations in the show's history - and was quickly tipped as a favorite to win.

'Somebody that honestly none of us were really thinking that hard about all of a sudden just became the freakin' frontrunner,' Blake Shelton said with clear amazement. 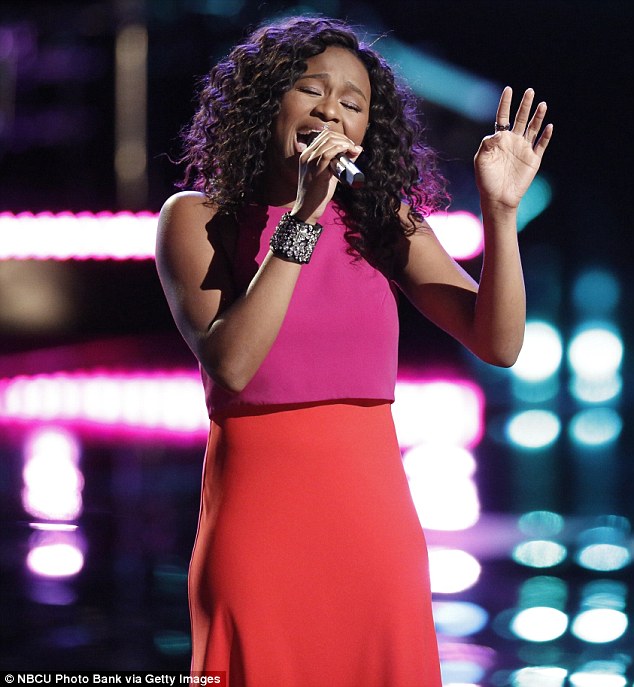 The frontrunner: Shalyah Fearing established herself as the surprise frontrunner on Tuesday while performing during the Live Playoffs on The Voice

Her show-stopping performance left all four coaches in a standing ovation and the audience going so wild host Carson Daly admitted: 'My goodness! As loud as maybe I've ever heard it.'

And even Carson, whose role is not to give comment, felt moved enough to praise her performance, telling the coaches: 'That was like watching an Olympic ice-skater just stick every single landing there.'

Pharrell Williams - one of the teen's two previous coaches who had let her go on the show - said he was 'honored to have been a part of your journey' and begged viewers to vote for her even though she is on a rival team.

'From the saints to the secular - please vote for this girl right here,' he said earnestly. 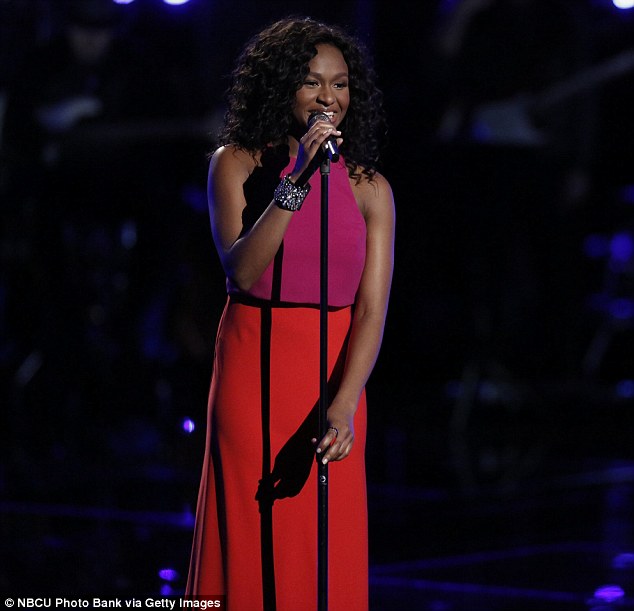 Third coach: The teenage talent was on her third coach before her breakout performance 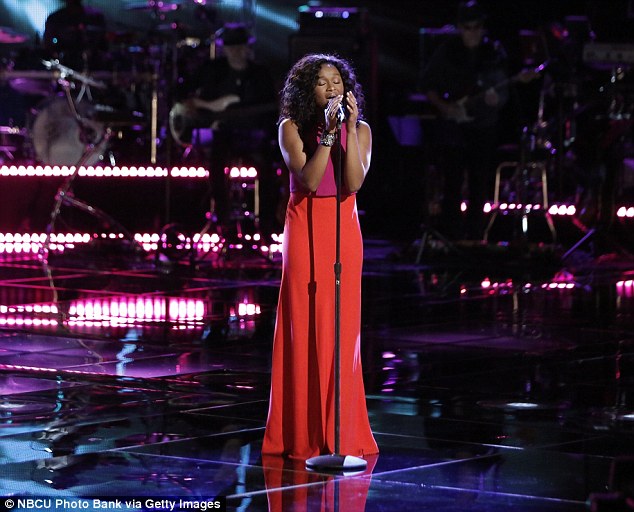 Listen up: Shalyah wowed the judges and audience with her rendition of Listen by Beyonce 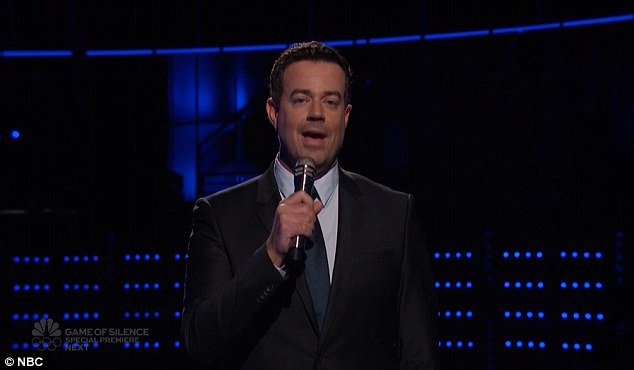 Stuck it: Carson Daly as the host normally doesn't critique singers but raved about Shalyah 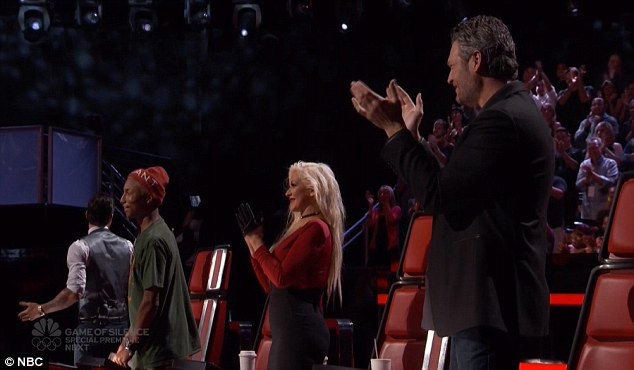 Despite everyone's shock, current coach Adam Levine - with a '70s style mustache - insisted he knew her potential even before her breakout performance, telling her during rehearsals: 'I am shocked that you are on my team - because you're a finalist.'

'Shalyah's power and range and ability is off the charts for her age,' he said.

Rather than beaten down by her close-calls, the youngster instead believes that having spent time with three of the four coaches gave her the upper hand. 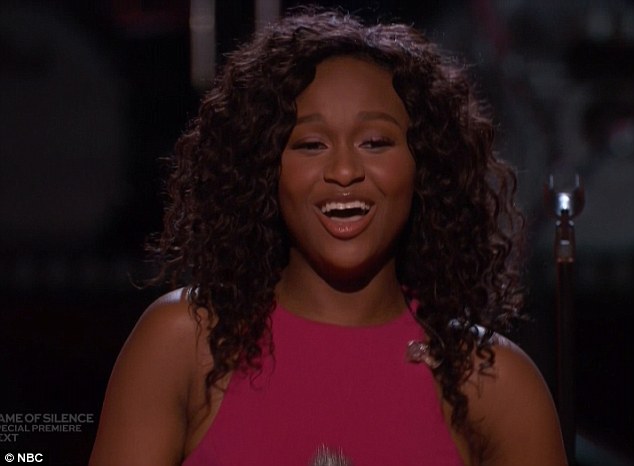 Teen talent: Shalyah said she had the upper hand from spending time with three coaches

'Christina's taught me how to use my growls, Pharrell taught me to make songs your own, now Adam is just teaching me that nobody's perfect, and I needed that,' she said.

Pharrell also has a contestant on her third coach, with 19-year-old Lacy Mandigo admitting: 'As soon as I think I'm going home another coach picks me up. It means a lot that they see something in me.'

Her latest coach insisted he was drawn to her because she kept fighting back despite going through 'situations that would've blown anyone else's candles out.' 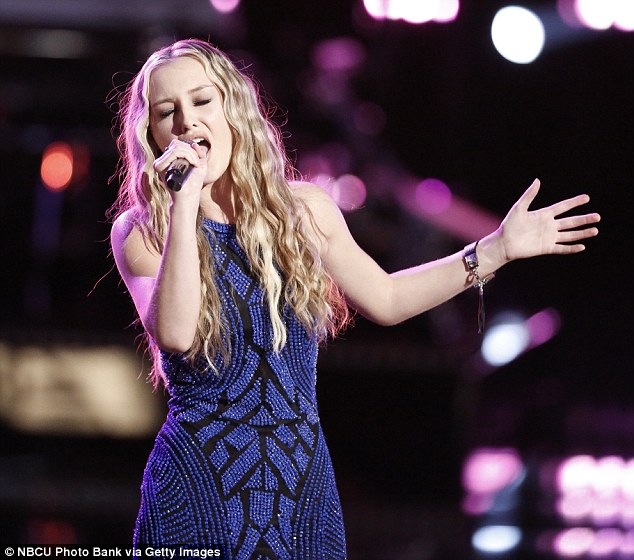 She's a fighter: Lacy Mandigo was praised by her third coach Pharrell for her fighting spirit

Pharrell then offered an unexpected warning in rehearsals, saying her 'beautiful' hair was 'getting in the way' and that she was 'too busy checking all the boxes while she was performing' to 'lose herself' in the song.

'You don't wanna be the next teenybopper sensation, you wanna be an incredible vocal sensation, and you have the ability to do that,' he told her.

After her performance of Pat Benatar's Love Is A Battlefield, Blake said: 'She's such a cute little girl and then all of a sudden this monster comes out of her. There's something special about you Lacy.' 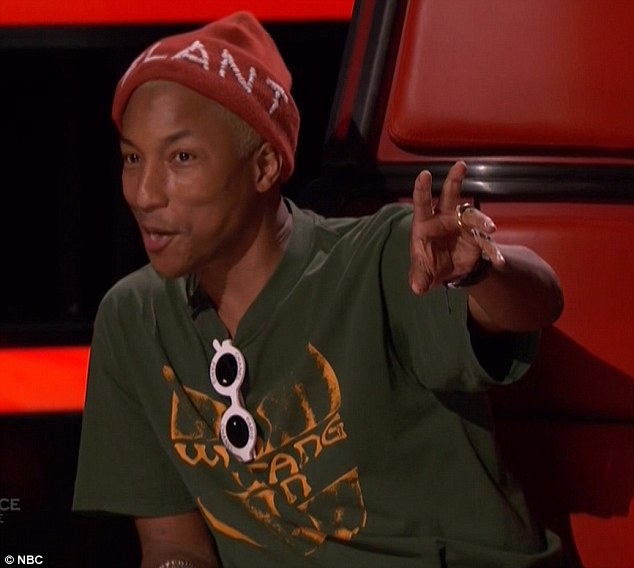 'You were team hopping on the show because you were never meant to go home, clearly,' Pharrell said proudly. 'You are meant to be here.'

But Pharrell appeared more moved when pre-school teacher Hannah Huston rehearsed Aretha Franklin's Ain't No Way, appearing to wipe away a tear at one point.

'Isn't it crazy how church chords can make a person cry?' he told Hannah, who he also called 'the kindest person I've ever met.' 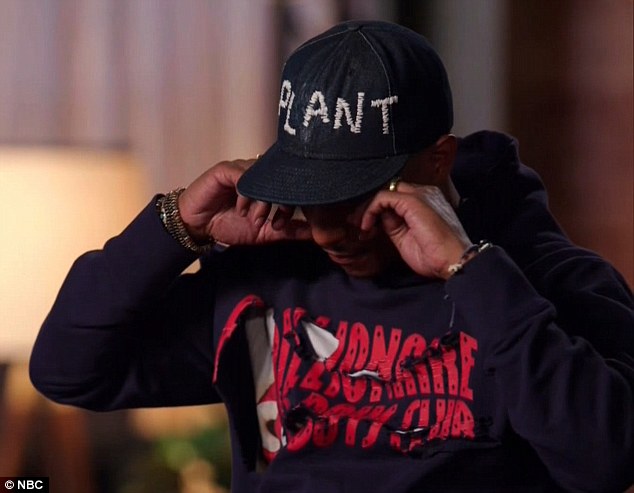 Getting emotional: The Happy singer wiped away a tear as Hannah Huston rehearsed Aretha Franklin's Ain't No Way

Hannah also had more tears as she was handed a book written by her young pupils in which they stated the ways they loved her, saying: 'Having their support means more than anything.'

As she finished her rehearsals, she put her hands over her mouth as she told her coach: 'I just love you so much.'

'Working with Pharrell is unbelievable - he just pierces into your soul,' she explained. 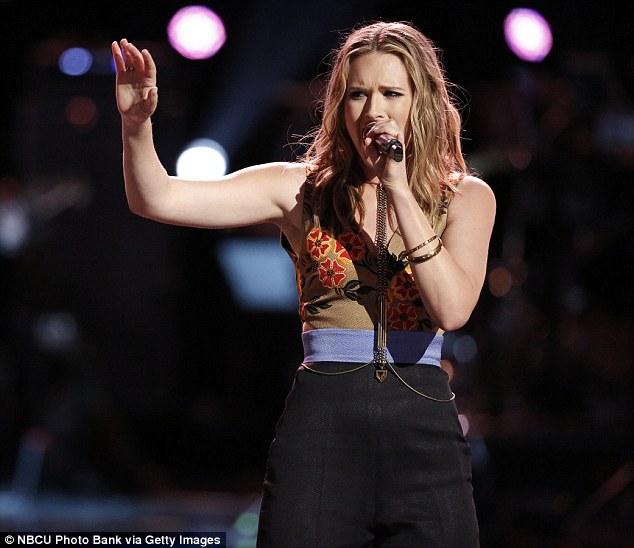 Kindest person: Hannah impressed with her take on the soul song

After her performance, Pharrell said: 'It's amazing the way you steal all of our hearts. America please vote for this amazing woman that's on stage right now.'

Team Adam's Brian Nhira had his most powerful moment offstage - when a mother with a non-verbal daughter asked him to send a video of him singing a full version of his blind audition song, Jesus Loves Me, just for her.

Footage was shown of the unnamed youngster with a giant smile as she watched it, appearing to wipe away a tear of joy. 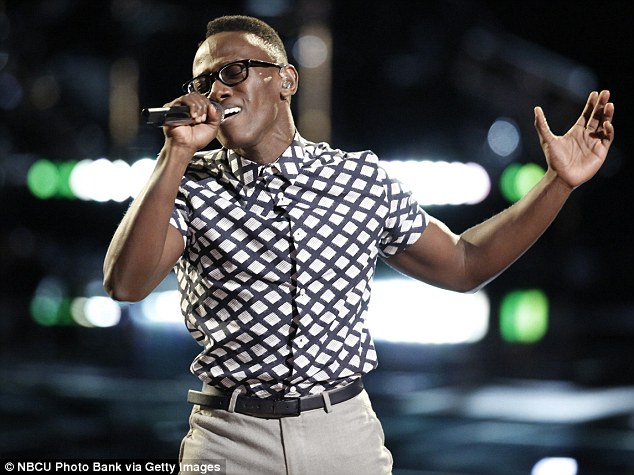 'My heart was broken for the little girl but then was also happy to play a little part in bringing joy to her life,' he said, with Adam telling him: 'You're a real good dude, man.'

His take on Sia's Alive had Pharrell marveling that his endless high notes were like 'a bagpipe,' and Adam joking that he will never again have to sing such a challenging song.

He also said of him: 'I like to call Brian ''Game Time,'' because I don't have to worry - you're going to go out there and kill it every time.' 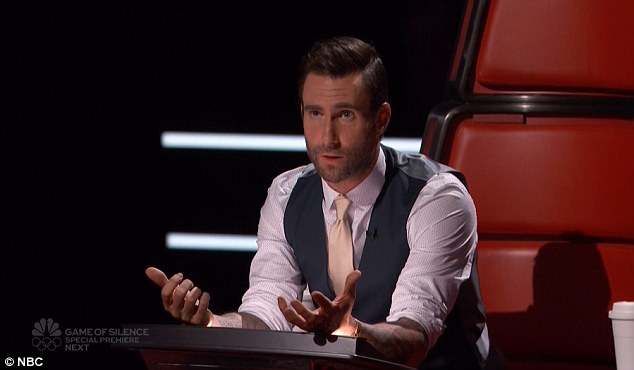 No worries: Adam said he doesn't worry about Brian because he kills it every time

'I think Brian can win the whole thing,' he predicted earlier.

Emily Keener, meanwhile, had the most unusual praise of the night - with her coach Pharrell calling her an 'amazing unicorn of a singer' after her take on Paul Simon's Still Crazy After all These Years.

The 17-year-old singer also seemed the most amazed at her change in fortunes, telling the star that she saw him talking about her on The Today Show where he called her 'something else.' 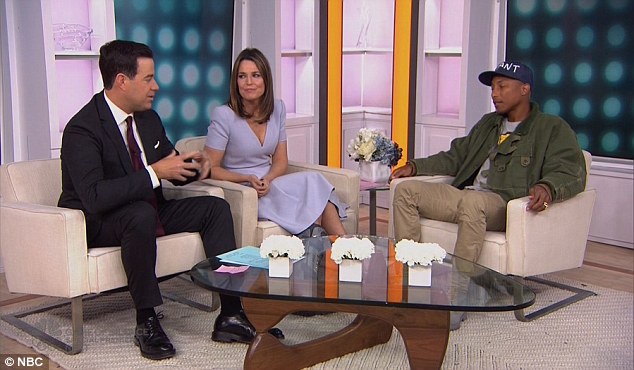 Morning show: Pharrell talked up his teenage singer Emily Keener while on NBC's The Today Show and she appreciated it

'Pharrell's talking about ME, as I'm sitting in my pajamas at home eating my breakfast,' she said with clear amazement.

After her live performance, Adam admitted she 'got me with that song' as Paul Simon is one of his favorites, adding: 'You made me feel all the things I wanted to feel when listening to that.'

Christina Aguilera, meanwhile, told her: 'You are from a different time period and it's very refreshing to find that at your age.' 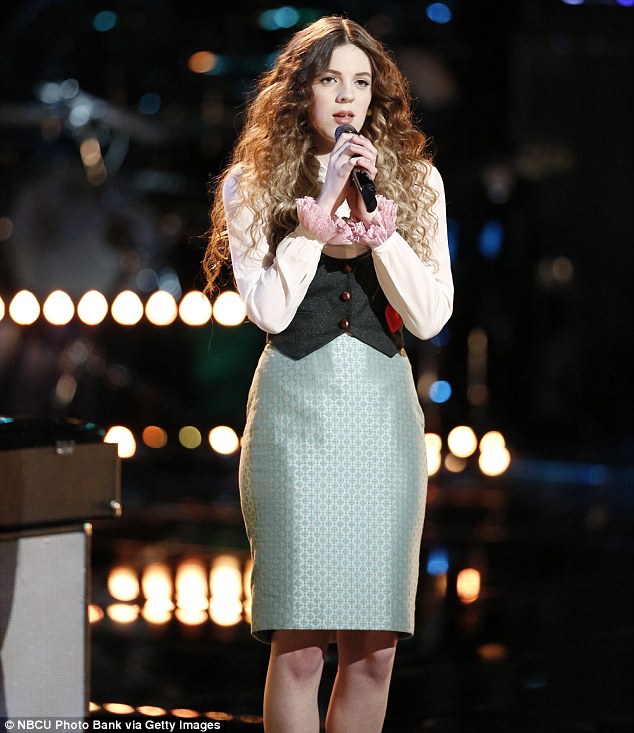 Unicorn singer: Emily earned rave reviews for her take on Paul Simon's Still Crazy After all These Years

Caroline Burns, who only recently turned 16, recalled being covered by Teen Vogue magazine - but admitted her friends are far more excited that she is being coached by the hunky Maroon 5 frontman.

'My friends are excited that I'm getting to work with Adam - they've been asking if he smells good!' she admitted.

Blake admitted the youngster is 'one of my favorites this season,' and after her performance of Kodaline's All I Want he joked about how she's a 'little tiny little girl' who then 'entirely blows your face off' when she sings. 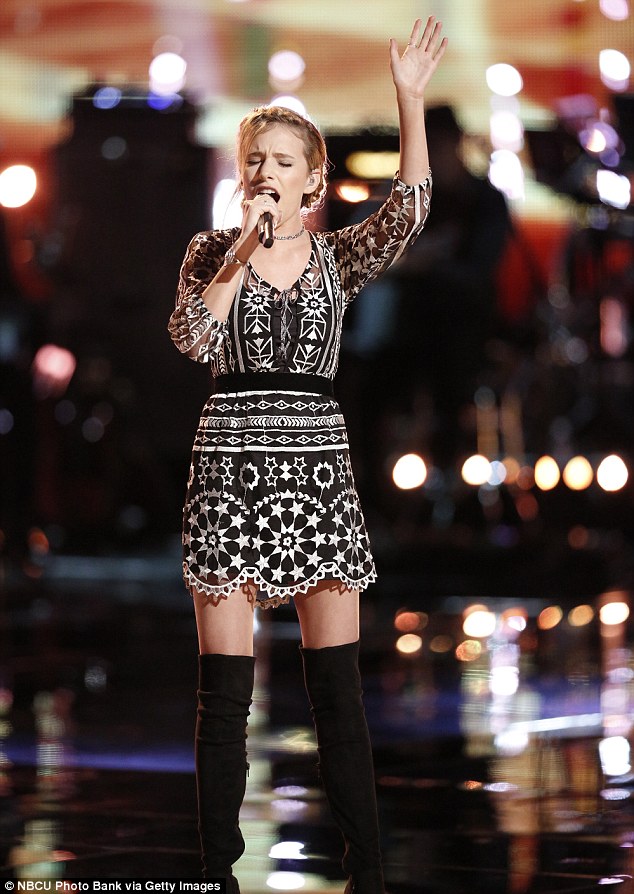 Young star: Caroline Burns, 16, belted out All I Want by Kodaline 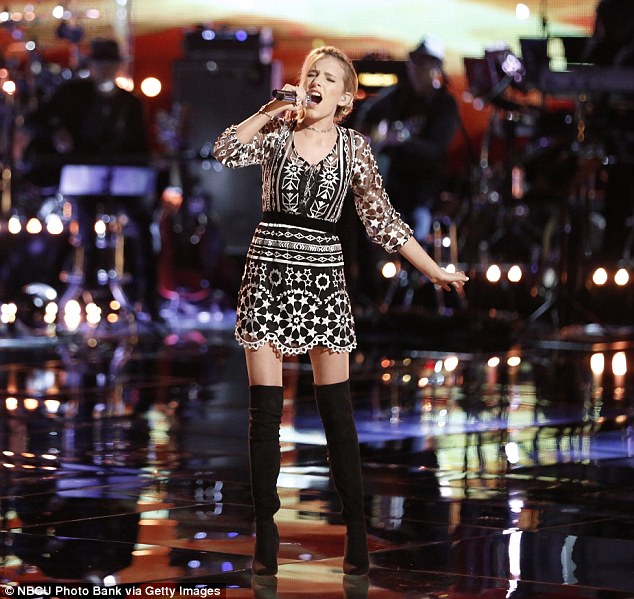 Huge voice: The teenager unleashed her powerful voice in a bid to stay on Adam's team

Medical student Moushumi also said she was amazed at how she has been received, saying: 'People are sending me messages from the Indian community saying, ''I see you on The Voice and it inspires me.''

As she prepared to tackle Justin Bieber's Love Yourself, coach Pharrell challenged her to stretch herself with 'emotional dynamic,' asking: 'Do you want to give the world Moushumi, and not just Mo?'

Adam's shy New York folk-rocker Owen Danoff was told he had 'a magical moment' by Pharrell after he sang Hero by Family Of The Year, with Blake also telling him he made the song sound like one he had penned himself. 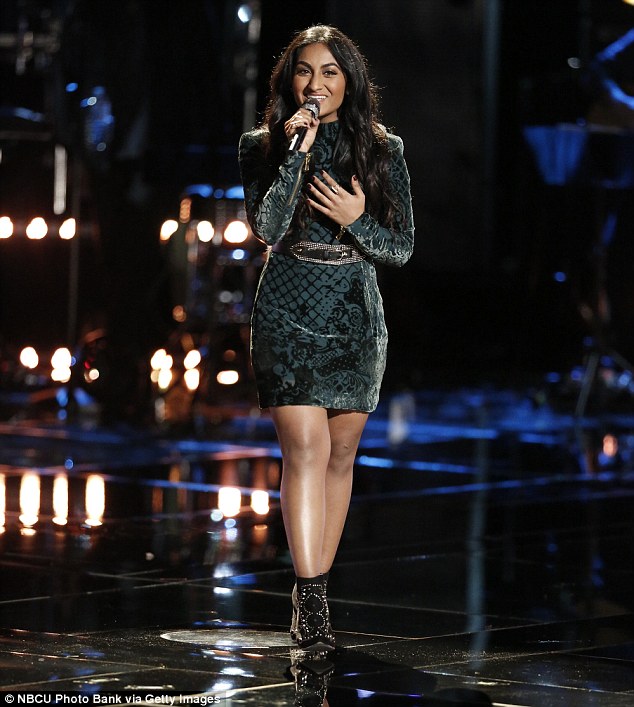 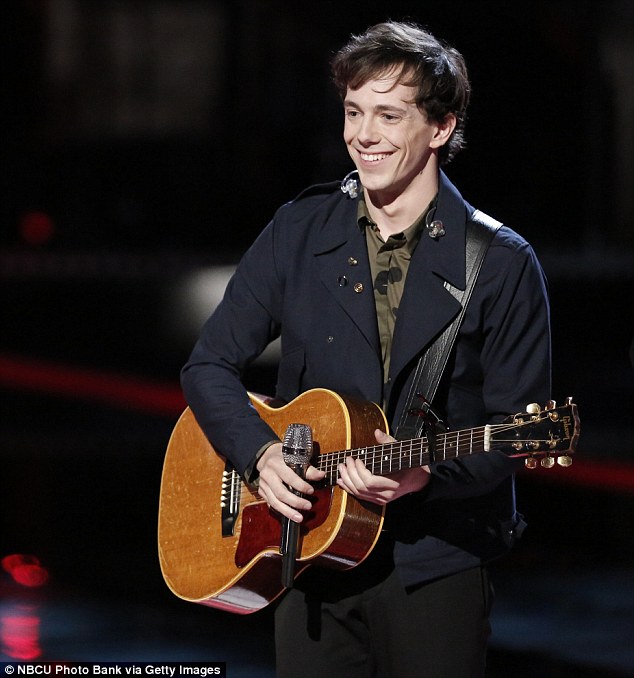 Magical moment: Owen Danoff was told by Pharrell that he had a 'magical moment' on the stage

His coach agreed that it was the 'only real mark of a great singer,' saying: 'You forget everything and think, ''Wow, this person is speaking to me through this song.'' Owen, I believe there isn't anyone on this show who's as good at that as you.'

Bearded guitar virtuoso Laith Al-Saadi took on Joe Cocker's version of With A Little Help From My Friends, with Blake joking: 'It's cool to know there's more verses to that song - I only knew there was one verse from the Wonder Years.'

Pharrell recommended all rock fans vote for him, saying: 'You just heard what he did. I know he's not on my team but it was amazing - you've gotta vote for him.' 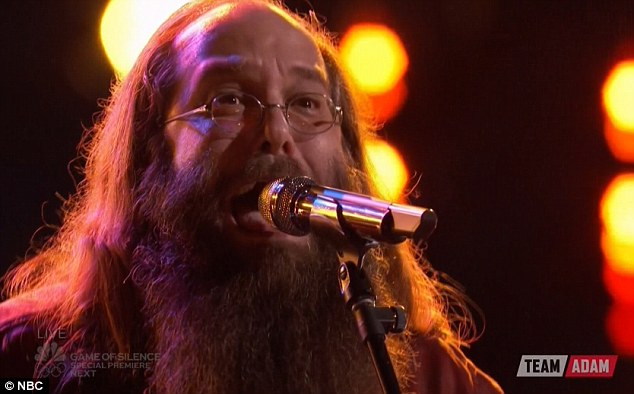 Rocking out: Laith Al-Saadi rocked out to Joe Cocker's version of With A Little Help From My Friends

Meanwhile, after Pharrell's indie pop singer Caity Peters sang Adele's I'll Be Waiting, he told her: 'Today I felt like you really released your spirit. You made that song your own.'

He insisted he wanted to keep the trained opera singer in the show when he was eliminated, saying: 'I had no more steals at that time but felt he deserved another shot.' 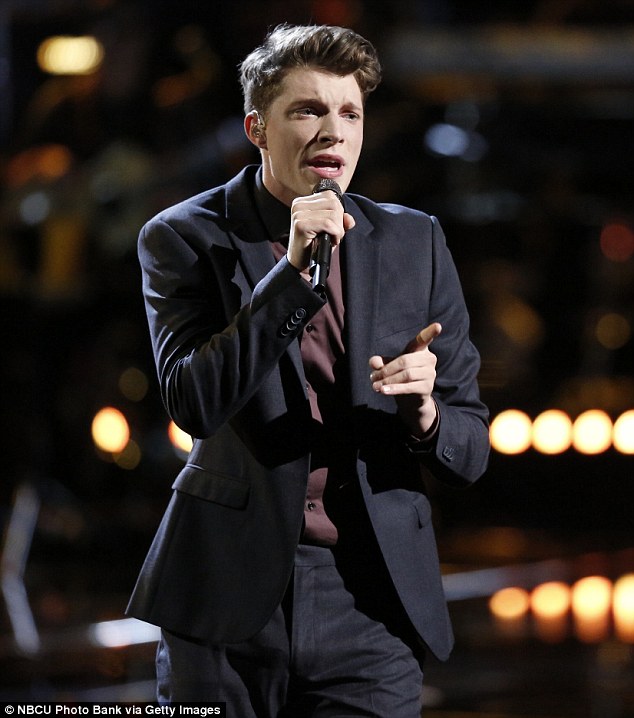 He's back: Daniel Passino was brought back by Pharrell after the Team Christina singer was earlier sent home 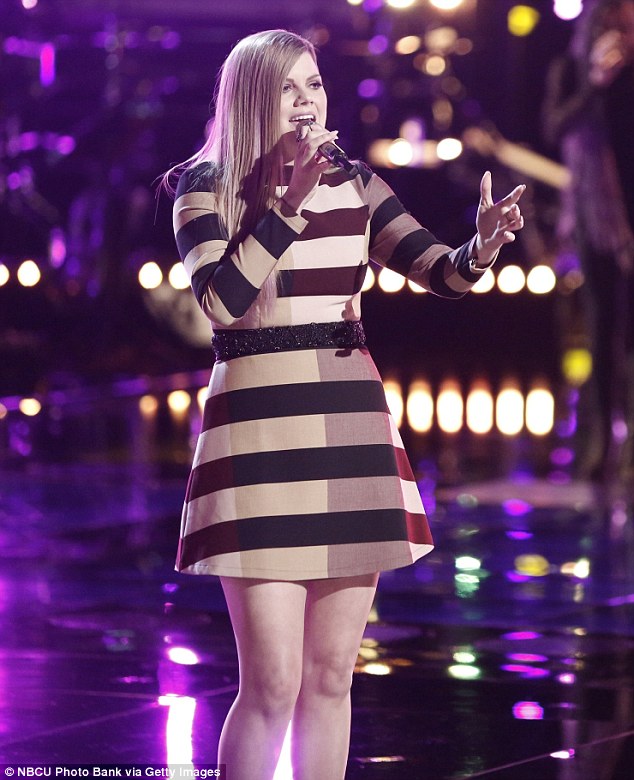 Indie pop: Caity Peters took on an Adele song and managed to make it her own

'You just wrote your future,' Pharrell told him after his performance of Bruno Mars's When I Was Your Man, standing up and getting the audience to shout 'Damn Daniel!' in a nod to a recent unrelated viral video.

Adam picked his own former teammate Nate Butler, saying he felt he got 'a raw deal' in the knockouts and telling him after his version of Hall & Oates's Sara Smile: 'Man, you're going to be here for a while.'

The Voice will narrow the field from 20 to 12 singers on Wednesday. 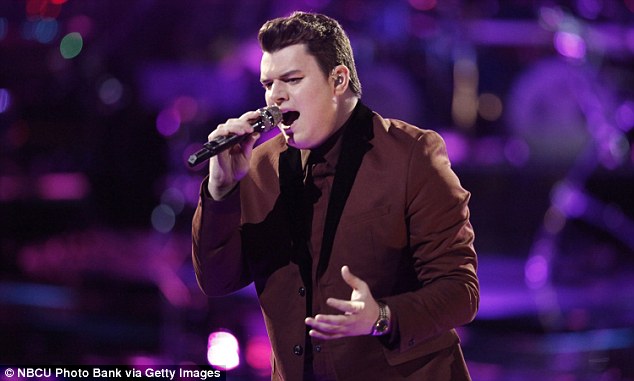 Raw deal: Nate Butler was brought back by his former coach Adam who felt he got a 'raw deal' in the knockout rounds

Shalyah Fearing belts out Beyonce song on The Voice